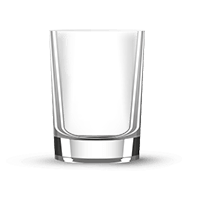 It's also called a "lowball", "whiskey" or "old-fashioned" glass. The bottom of old-fashioned glass is thick. Rocks glasses carry between 6 and 8 ounces.

Apple Pie On The Rocks